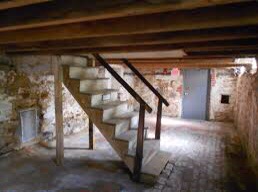 Jessie Sloan is a private person that always needs to be in control. It had been six months since she returned to Harper Crossing, her hometown, and she had been living with her sisters. However, she needed to get away, because, even though she loved her sisters, they pressured to share things with them, a thing which she was very uncomfortable doings. She decides on a place wich is perfect for her. Everything seems under control, until she meets Zack Courtland in the basement, and the landowners assume they are a couple. Simce, the eighty-year-old sisters are more inclined in renting the place to a couple, neither Jessie nor Zack correct them. She is unnerved by Zack, not only because of the chemistry between, but because she tends to out of control with him and share things that she doesn’t share with anyone else.

Zack Courtland needs a cheaper place that the one is currenltly renting, since he needs to cover the costs of his mom’s treatment and her home care facility. The only thing on his mind is saving money and winning the boxing tournament, that will give him financial security.The last thing he needs is a destraction. However, he doesn’t plan on finding this beautiful woman in the basement, and having to pretend to be her boyfriend to have the apartment. She’s not like any other girl. She doesn’t see him as the bad boy she wanted to pass the time with for a while. She also defies him in every turn, which he likes.

The thought they only had to pretend until they got the apartment, but they discover that the land owners live uptstairsof their apartment. Will the guy who does’t want destractions and the girl who needs control in her life turn their relationship from fake to real?

This book wasn’t one of y favorites. It lingers on their thoughts and feelings about deciding whether to act on what’s between them or not. Nevertheless, they were cute together. The scenes with their families were very nice too.